It was a gorgeous night for football practice. I curled up cross legged on my blanket and looked at the crescent moon just beginning to show its face. Crickets chirped and the chatter of parents surrounding me was a soothing sound. Across the field, one of the players on Bear’s team sat by himself while the boys scrimmaged around him. I had arrived late so I wasn’t sure what had happened… whether it was injury or disciplinary.

Bear, who usually plays center (that boy has an impressive hike in shotgun formation) was playing defensive right tackle instead. I watched as he ran, bringing down boys in tackles and never giving up on attempts. At one point, he crossed the field, dove after the runner with the ball, almost got him, rolled, got back up on his feet and trust me, if he had 10 more yards, he’d have had that boy down. I could hear his coach yelling, “Bear! Whoa! Way to be there, Bear!”

Over and over I could hear the coaches, “Give it all you got, boys”

“Leave it all on the field.”

I heard the boys roar in response, saw them fist bump and chest bump and smack each other’s backs in encouragement.

As they played, one of the coaches walked over and dropped next to the boy sitting alone, and they talked for a few minutes. Then coach helped him up and carried him on his back to the sidelines and his mom. His ankle was wrapped, but he was joking with coach on the way over. It was a sweet and gentle sight.

The coach walked back out onto the field, yelling plays, pointing where kids needed to be, encouraging, commanding, leading. At one point though, he stopped the whole team.

He pointed to the v-shaped gaggle of geese flying overhead, honking boisterously. As they watched, the lead goose fell back to the end of the line and another one took his place leading them southward. 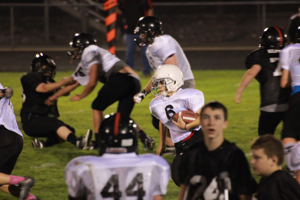 “Do you understand what just happened?” Coach pulled the team in a circle around him and described the teamwork they had just witnessed. “They all work together and follow the leader. When he tires, he falls back and another goose steps up.” He pointed to each of them around the circle, “That is what a team should be. Work together, all moving together, watching each other and helping. You step forward when another can’t. You fall back and let others help. You. are. a. team.”

They roared together jumping up and down, waving helmets overhead, watching the geese disappear in the twilit sky.

This, y’all, this is why I love this beautiful game. I love the respect for authority, the leadership, the athleticism, the community, the dedication, the teamwork.